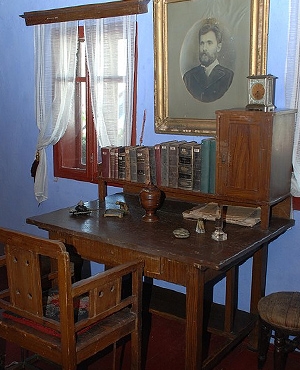 Appreciated as one of the oldest buildings in the area of Tara Nasaudului (County of Nasaud), the birth-house of the poet George Coşbuc was built around 1840, being inhabited, generation after generation by the poet’s parents together with their 14 children and the grandfather of the poet, the priest Anton Coşbuc.

After the death of the priest Sebastian, Cosbuc’s father (1901) and mother, Maria (1903), the house remains, agreed by the brothers, to the youngest, Aurel. This will pass it on to his older son, Sebastian, from whose widow, Maris, the Romanian government will buy it in 1954.

At the initiative of the group of Transylvanian scholars, editors of the magazine „Luceafărul” (The Evening Star), from Sibiu, the “master” of the house, Aurel Cosbuc agrees to set up a museum dedicated to the poet. This happens and this way, the birth house of the poet George Cosbuc will become the first Romanian literature’s memorial museum in Romanian area.

It is equally true that this museum was organized in the area of the firsts two rooms (the sanctum and the guests’ room), where there were exhibited, on several tables, the volumes published in Romania, framed photographs of the poet and his family, papers and magazines in which the poet has published.

In the other four rooms there lived Aurel with his family. On May 14th 1922, there is unrevealed the first memorial plate on the house’s wall, only four years after the death of the poet, at the initiative of a group of professors and students in medicine at Cluj. The plate is brought by train up to Salva. At Salva station the professors and students from Cluj are awaited by officials from Nasaud and Salva as well as by professors and students of the schools in Nasaud, who, together will build up a procession that was to follow the route Salva Station – Birth House of the poet, for 8 km, along Salauta River. The marble plate was carried on arms by the eminent students and pupils that were singing romances composed on the lyrics of the poet.

The press of the time records the event like this: ”In the Railway Station Salva, people impossible to count, dressed in fair clothes salute us, the several hundreds of white collars, came from the dust of the cities to piously honor the old house of the nature singer. The clumsy villagers welcoming us happy; the clumsy us, we are happy too, wearing our black, scanty clothes, that appear so ugly for the first time, in comparison to the foam of the white garments and shirts with embroidery…. After a short ascension we suddenly descend to the small village, tight-packed at the feet of the hills surrounding it. The little church’s tower rises shy and pious over the households that do not seem wealthy. The village Hordou, where George Cosbuc was born, is really modest.”, observes C. Humureanu in „Gândirea”, no.II, p.74-75, Cluj, 1922.

During the troublous and agitated times of the war, when the authorities, timely occupying the country, will set up a saloon in the house, the villagers made a common decision not to enter the house, which, as a salute, the occupying, used to spit.

July 4th 1954 is the Museum Coşbuc is re-opened to the public, after a two years long reparation period. It was a Sunday, when the lanes were filled with “foreign” people and inhabitants of the village.

In the presence of the authorities of the Region Cluj, of the County Nasaud, of many scholars, of the member of the Romanian Academy - Emil Petrovici, of Gavril Scridon from Cluj, Gavril Istrate and Al.Husar from Iaşi, of numerous writers from Cluj, among which the late A.E.Bakonschi, Vasile Rebreanu, Aurel Rău etc., many students from Cluj and Nasaud, there was unshrouded a second commemorative plate and another bust of the poet made by the same C.Medrea.

The national and local press dedicated large editorials to the celebrations in Cosbuc. The village inhabitants made proof again of their proverbial hospitality. An interesting and inspiring moment was the celebration of the centennial of poet’s birthday in the period 17th -19th of September 1966. During those days, every inhabitant of the village had a mission to accomplish for the 150 guests, as the statistics registered. And „it was so much sung and so much whistle, as never before”.

Registered in the calendar of the Great Anniversaries for the year 1966, the Centennial was honored by the presence of writers from all continents. „All over the world, poets are born, but you, Romanian, make yours immortal” – noticed the representative of the Italian Union of the Writers, Ellio Filippo Accroca.

Homages or anniversaries in the memory of the poet, follow the same traditional ritual, every time is needed. Every time the inhabitants of the village pay their spiritual and material tribute to the success of the event. The schoolchildren starting from kindergarten up to the high-school graduate are always present, dressed together with the parents, in festive garments well-kept in dowry chests.

We have to remind here, the welcoming of foreign delegations, of politicians and of writers, at all editions from the first decade of October, of “Cosbuc Colloquia”, at awarding of prizes, book releases, etc. Within the school, there is a literary-artistic group centered on themes from the work of Cosbuc.

Another important cultural event developed in 1998 on the occasion of commemorating 80 years from the death of the poet. At that moment, there were changed the tomb stones of the poet’s parents and great-grandfather from the cemetery, with marble ones and there were unshrouded 3 memorial plates at the new school, on the foundation of the old school and at the Cultural Center „Iuliu Bugnariu Sălăuţeanu, school teacher and folklorist”.

The look of the museum today was set in 1986 based on the exhibition theme elaborated by the researcher Constantin Catalano, when, supported by the president of the County Council Bistriţa-Năsăud, Mihai Marina, the entire museum from Hordou was rehabilitated.

The windows of the old building were reconditioned on the initial look, there was built a barn for the exhibition of household objects, there was arranged the open-air amphitheater in the back-yard of the house, there was rehabilitated the administrative building with two stories and the mill of the village, the Mill Street was asphalted and the path to the mill was paved.

This time the mill became functional thanks to the hydro-technical improvements undertaken along the Salauta Valley, where from the water was directed through a special canal to the mill, to the great joy of the visitors and especially of the students, and to the nostalgia of the elder.

The first three rooms of the house (the porch, the guest-room and the sanctum) recompose the atmosphere of poet’s childhood especially because of the objects from the inventory of priest’s Sebastian Cosbuc family. Furniture, books from the library of the priest, family paintings, decorative objects (towels, plates), make up this idyllic, patriarchal atmosphere.

The documentary exhibition in the living-room of the family convinces the visitor about the national and universal value of the poet from Hordou. Aspects from the history of the museum are to be found in the fifth room, the former storage-room of the family, where the moment 1966, the centennial of Cosbuc’s birth is especially evoked. Part of the poet’s library, as well as several personal objects are sheltered in the former parish office.

After this itinerary, the visitor is invited to see the exhibition of household objects and then is led to the mill-museum, a real piece of heaven and introspection, where one can still see the poplars “eternally mourning” …!!! 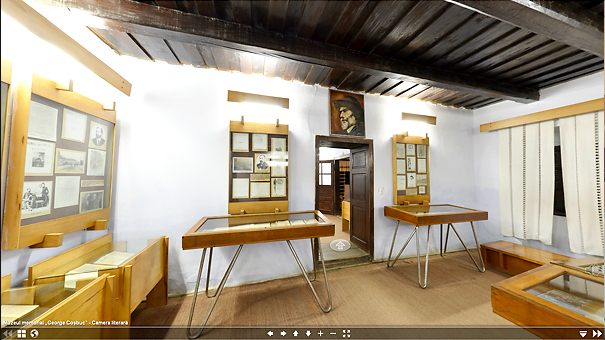